A Negotiation That Worked

by Leann
Spring has definitely arrived in south Texas. I have the used tissues to prove it. But part of the allergy problem is spurred by everyone and their distant cousin working on their yards. You know, pruning, edging, mowing, mulching. Things I do not do. I don't even have a brown thumb. It's black ... or maybe that color that shows you've voted in an Iraq election. I could kill a house plant in someone else's home. 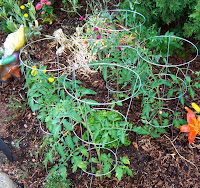 But my husband loves to be outside. Every year he plants a large vegetable garden consisting of mostly tomatoes. We usually end up with enough tomatoes to feed an entire homeless shelter for the summer. That's to avoid mistakes. The more you plant, the better the odds that you will have plants that survive a freak late frost or even chemical warfare in our neighborhood.

This springtime ritual has been going on for many years. He visits every possible place that might sell tomato plants. (This after trying hard to grow them from seed for a few years. We don't talk about that.) Then he visits the same stores again ... and again. Needless to say this takes plenty of time and energy. And that means that our prune-the-shrubs-fest never seems to happen. Our shrubbery has gone jungle. In fact, some of the bushes have grown so high that no light comes in the house--the windows are obscured. I'm betting the neighbors think we are actually in the witness protection program.

But I understand about priorities--and those tomatoes are a priority. They make him happy. His grandfather was a farmer and I think growing vegetables is in his blood. But the shrubs. Yikes. So this year, when a landscaping crew was cleaning up a neighboring yard, the head of the crew came over to me and asked if I wanted our yard done. Um, that would be a "You bet I do." But this is dicey. See, my husband doesn't really want to do the pruning and shaping and cutting (he has a bad shoulder for one thing) but he doesn't want anyone else to do it, either. It's the guilt. He feels he should be doing it. And that, my friends, is how it never gets done. Then the tomatoes always win--as well they should.

So I got brave--yes, this can be a sore subject--and was able to try a different approach. It went like this: "I know you want to work on your tomatoes, but the yard really needs work. I had an offer. Can I tell the guy yes?"

Hallelujah it worked! Or maybe I'm giving myself too much credit. I think what worked is the realization that some things are a little much now, that we've worked hard and saved our money for moments like this. We are able to pay for someone else to do that which we hate or is just too much work. It's a good feeling if you allow it to happen. But of course, like me when the people are coming to clean and I must clean before they clean, he had to mow and edge first. But after all the work was done by both my husband and the landscapers, man does our yard look magnificent. Mission accomplished.

And now, drum roll ... the winner of the Name That (fictional) Cat contest is ISIS! A cat named for the goddess that she thinks she is. Thanks everyone who helped. Do you like it?
Posted by Leann Sweeney at 8:22 AM

Love the name Isis. It was the first thing that popped in my mind when I read your description of the cat. It seems to fit perfect.

Glad you got your yard done! My husband is ready to get out in ours and do some stuff. (Yes, he actually does it!) He's also ready for golf. We're in NE MS, so it won't be long now.

Wonderful choice for the kitty's name. Can't wait to read about her in the book(s).

Wow, two accomplishments in one blog...congrats! The yard is a big one...I'm not one to do outdoor tasks myself either. Thank goodness there are people who can do it for you. Can't wait to read the new book. I loved the first one!

I wish I had a green thumb. I don't even want to grow veggies or anything; I just want our front yard to look presentable! I try every year but I have a hard time finding things that grow in the shady environment of our house...and the deer always take their toll!

Looking foward to the new book with Isis...thanks for letting all of us be a part of the naming! Such fun!

Thanks again all. Isis will be appearing in the book out in 2011. That seems so far away ... unless you're writing it! LOL. (deadline fast approaching).

LOVE IT!!! Now could you send some sunny weather to Wisconsin, please!!!

I love the name Isis. Everytime I hear it I think of the TV show and her motto before changing.. "Oh Mighty Isis".

Kudos to getting hubby to let the landscaper do your yard work.

Have a good Sunday.

Woo Hoo! Isis is a suitable name for the cat!

Leeann, you are a master negotiator. I may be calling upon you for advice in the near future...not about the yard, but about the house. Can't wait to meet Isis.

I can't wait to read about Isis the glamour puss :)

And she is glamor puss! I don't think I have had more fun writing a character--and she's not even human!

Love the name Isis! And my husband loves his yard work and I used to love painting the rooms but my arthritis and asthma are just too much for me to take that on now. Fortunately we too have saved over the years so we can afford to have someone else do the work and we can reap the benefits of the (almost) instant gratification. Looking forward to the 2010 book as well as the 2011 one!

Isis is a great name, Leann! Can't wait to read about her.

And hooray on the landscapers. It's always nice when you can hire out.

Love the name Isis! Very appropriate :-) And I have the same black thumb - makes me very sad as I love having plants around the house.

Tell your hubby,I love tomatoes too. I eat them almost every day and my doc told me I have the highest good cholesterol he has ever seen. I grow them too,but in pots because of our yucky NYC soil. The smell of a warm tomato is hypnotic to me. Tell your hubby I'll be by for his extras in August;-)

Tomatoes are indeed a super food. And the home grown kind are the best. But extras in Texas are only to be had in June. By August your can pick the sun dried variety off the vines!

So he planted them already? This is hard to process because the last of the snow was washed away just about a week before the hurri--- I mean rain storm on Saturday night.
Not to be a pest,but does he sun-dry them too? Hmm,I've never tried that.
Oh and I do like the name Isis.

Wheee! So excited that a name I submitted for the "Name the cat contest" was chosen.

Great name choice!!! this contest was so much fun, let's do it again...