And the Little Old Man Just Kept On Going

Husbands. Who can figure them out?

I witnessed a minor event a few weeks ago that really started me pondering the matter. Here’s what happened.

As my husband and I were strolling up the sidewalk on Caroline Street in Key West, we noticed an elderly man riding a rental bicycle along the side of the street. In a wire basket attached to the handlebars was a little white mop dog. I don’t know the breed, I’m sorry to say, but you know what kind I’m talking about.

The man was dressed in typical tourist garb – short sleeve button down shirt, plaid shorts, black socks above his calves, and dress shoes. The dog was wearing a pink bow and a collar that sparkled in the sun. The man was talking to the dog, oblivious to what was happening around him . . . or behind him. Which was a major mistake.

Because behind him was his wife, also on a rental bike. She was a small, frail woman with white permed hair, a neatly pressed flowered azure blouse, matching azure capri pants, and sturdy brown sandals. As she drew even with us, she began to wobble, and suddenly she was headed straight for the curb, saying in a faint voice, "Oh, my."

We gasped as she hit the curb and did a slow motion tumble to the ground. We rushed over to make sure she was okay (she was), then we helped her up. It was obvious she hadn’t ridden in years, maybe decades, but because her husband wasn’t even aware that she’d gone down, and was now at the far end of the block, she had no choice but to get back on the bike and follow him.

Which she attempted valiantly, until her bike began to wobble again, and like a rerun, she hit the curb and fell a second time. Meanwhile, her husband was still talking to the dog, still oblivious to his wife’s situation, and as we watched, he turned the corner and kept on going. Not once had he glanced back to see if his wife was following.

“What the heck is the matter with him?” my husband asked, as we continued to watch the little woman wobble and fall until she, too, turned the corner.

Right. Like he didn’t know. Like he didn’t remember the time in New York when he went through the revolving doors into our hotel and headed up to the reservation desk, leaving me to struggle with a rolling suitcase, which somehow got me wedged inside the doors. The doorman had to stop it to get me out.

Or the time my husband led the way through a crowd outside a movie theater in Chicago, never once checking to see if I was behind him, while two guys in black trench coats surrounded me and tried to take my purse off my shoulder. My husband never saw the wily move I 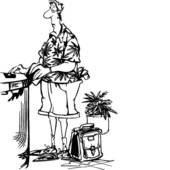 made to elude them. His loss.

I call it The Oblivious Husband Syndrome. OHS, if you will. (Although once you give it letters, a big pharm company somewhere will start to work on a pill for it.) I don’t know if all husbands come down with OHS, but I’ll bet it's common enough that some of you have stories. Want to share them?
Posted by Kate Collins at 12:01 AM

Well, I can't say for sure about husbands, but I know that boyfriends definitely come down with OHS...or would it be OBS? Mine is forever doing little things like that...like when I don't know where I'm going but we can't ride together so I'm supposed to be "following" him. Somehow, I still always manage to get lost. Guess I should have ran the red lights so I could have kept up and stayed right behind him!

Oh, yes. My husband and I do our food shopping together, mainly because if he went alone he'd come back with the most pathetic pile of stuff ("but you didn't put it on the list!" he whines), and if I went alone I'd have to carry everything from the car. But put him behind the cart and he zones out, leaving me trailing twenty feet behind hauling a 20-pound bag of birdseed. Hello? Could you hold still long enough for me to put this in the cart?

Once in a while we will meet for dinner after work just to make a change from eating at home all the time. We are each driving our own car. Why is it that he absolutely has to beat me home? I mean he drives faster than he ever does when I'm with him. I always think what would happen if I had car trouble or an accident (thankfully that never has happened). Why is it so important for him to get home first?

My dh doesn't really have OHS. He makes sure I am near him. The only time we separate is to get other stuff like when we are shopping at the mall or Target. And then we text each other to find each other. lol Too funny. :)

Lover of Books--either you guys haven't been married very long, or you've been together long enough to find the cure! And if thet's the case, please reveal the secret!

I hate going to parties, church picnics, family reunions, etc., with my dh. Once we are there, I might as well be alone, because he totally "forgets" that we are together until he gets ready to leave, then it's "oh, yeah, let's go now" and then talks another 20 minutes to somebody else. I don't even bother to take him to the grocery store with me, and completely refuse to have him with me if I want to go shopping!

LOL, Kate. That is TOO familiar. I started seeing it when we were first married. We'd go to parties and he'd disappear, so I just adapted and started mingling by myself and having a great time. Of course, I'm independent by nature, so it didn't take much adjustment. Over the years, it just got easier and easier. Probably no surprise, we divored years later. :)

I think I can top your tales of OHs. My husband is in TV, and we often get a prime spot at outdoor events by climbing to the top of a TV live truck and watching things unfold. I once had a medical injury that led to partial paralysis in one leg. I could climb, but it wasn't easy. With his considerable help, I made it to the truck's top for an air show.
Well, he got paged, had to rush to cover a breaking story, and forgot he'd left me perched high atop the live truck by myself.
The live truck operator was soon called to cover the same story. He starts pulling away with me hanging on and screaming from the roof. Thankfully, some spectators heard me, and someone climbed up to help me get down.
I didn't speak to my OH for the rest of the week.

Deborah, you win hands down! Wow. Scary! My husband definitely has this affliction. But it is suddenly cured if I'm doing the driving. Then he's watching every move I make and making sure I know that even after decades of driving, I'm not quite good at it yet.

I agree with Leann, Deborah. You win this one! It's funny now, I'm sure, but at the time, probably not so much.
Leann, my hubby also tries to dictate my moves while I'm driving, which he hates when I do it to him.
The other day he said, "Watch that post when you back out."

Oh, you mean the one I've been avoiding for twelve years now? AACK. And other than having OHS, he's really helpful and considerate. It's just so odd that he can leave me in the dust and never turn around to see where I am -- like stuck in a revolving door.

This rarely happens to me--mostly when hiking and only then because I'm. So. Slow.

I keep wondering about that husband on the bike. I wonder if the woman gave him what-for when she finally caught up with him!

My dh definitely has this. I can vividly remember being in Disney World with our then 3 month old son (on a family reunion trip) and it was time to board a bus back to the resort and my dh picked up our son and got on the bus, leaving me to fold up the stroller all while carry several bags/packages, a diaper bag and large balloon. People on the bus laughed the entire trip back to the resort.

He is also famous for walking through a door and letting it slam in the face of the person (usually me) behind him. Definitely OHS.

I think it comes down to we're going to be celebrating our 7 wedding anniversary in May. I think I lose him more at parties than he loses me. lol OWS is what I have. :)

My husband always keeps me in sight, but he is oblivious in other ways. For instance, when he is parking the car, and there are obstacles such as a puddle or a bush, he makes sure that things are fine on his side, but totally forgets about the passenger. Many's the time I've had to draw his attention to this. "Thanks for parking me in a bush! Thanks for making me leap over this big puddle!" He's always genuinely sorry, but continues to be completely oblivious. He does the same thing to his parents and any other passenger, so I'm sure it's not just a passive-aggressive action against me. :)